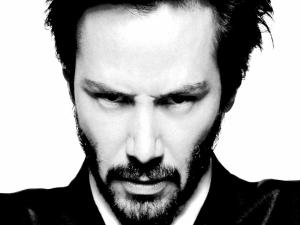 What’s The Most Embarrassing Thing That’s Ever Happened

To You While Watching A Keanu Reeves Movie?

its employees would clump together into their various

that the Company had graciously built for the purpose of meeting

and they would, shit. you know. they’d meet.

every 38 hours or so

the agendas of these meetings were discorded and varied

and always began with something they called Privacy Breakers

During this Mandatory Sharing Activity each Control Guide

would pose a randomly personal question to their team

most of the questions were sanity-cracking but predictable like:

how many times this week have you publicly felt grateful for working here?

or what’s your dog’s favorite color?

The Control Guide was playing hardball for Its own reasons again

This morning the Control Guide, upon calling the meeting officially

to order, looked It’s laptop straight in the face and demanded

in a harsh verbal hue:

while watching a Keanu Reeves movie?

Nobody in the room had ever been asked this before

It felt so goddamn random and unnecessary and the nervous

Zebort, with her throat constructed of gravel and her entire body

Drunbklilu sat directly to the left of the Control Guide

so it was Drunbklilu’s responsibility to personally confess

and holy fuck! she was terrified! “I’m not ready for this, but

I guess it would have to be, ha ha, I was watching Bill And Ted

with this boy I really liked at the time and I don’t know, at some point

just as the two chums jumped out of their time car I..” her head dropped

down in shame, “farted.”

Silence. And then The Control Guide spoke

“You say you farted. But as our many trainings have taught us

there are different way of farting. Did this farting you’ve just shared with us,

YOU KNOW WHAT I’M SAYING?!! Was it compassionate or alarming?!

Was the farting ‘out loud’?”

He broke up with me shortly after.”

The Control Guide appeared pleased with this answer

but Shadborg was pissed. He sat at the table

a few dozen chairs down from Drunbklilu fuming

because everyone else in the room seemed focused on the farting

and nobody seemed to give a shit

and Keanu Reeves wasn’t even in that!

But fuck, what did it matter?

Shadborg’s repulsion towards the entire goddamn thing had gone unnoticed

and the Privacy Breaker rolled on. It was Xhdyoe’s turn to speak

and prayed its thanks

who merely arrived to work ‘on time’

Xhdyoe excelled in tucking its shirt in and smelling smug

but when it came to knowing anything about movies

“I have no idea who Keanu Reeves is”

Xhdyoe admitted, “My hobbies exclusively include

taking pictures of myself with my dog while hiking

and accessing public transportation in hopes of winning

the favor of The Supreme Rulebots. I will say my dog’s favorite color

is indigo. Because she’s sensitive like this. But I have no time for film.”

abilities but he’d failed to answer the question. Hell, he wasn’t

sobbing or feeling bad about himself or anything so the Guide

declared his answer ‘incomplete’ and Xhdyoe was instantly obliterated

Exactly 4 seconds after his obliteration, everyone sitting in the

as a Companywide email had just been sent explaining

the email was accompanied by a recent picture of Xhdyoe

like mouth herpies, the question made its way solemnly

and this discrepancy had pissed Plankto off

Lolo had suffered a miscarriage while watching Parenthood

Sexswing had understandably relapsed back into heroin

after his best friend made him watch Knock Knock

by the time the question reached Shadborg

the rest of the entire room was either secretly plotting

their own suicides or voraciously sobbing

as Shadborg sat there, not immediately speaking

“Nobody’s said anything about John Wick yet, Shadborg.

“The only embarrassing thing that happened to me while watching John Wick,”

Shadborg told The Control Guide, the words falling out of his face before

he’d known they were even in there, “was watching John Wick.”

than shame about anything. It demanded he pick something else

“I guess my favorite one would be The Watcher, because you know, he’s

doing all that watching. And while I was watching I was sort of like

in this movie but I’m going to wait to grow it out like that until after I’m dead.”

The Control Guide was still not pleased with his answer.

He didn’t seemed humbled enough yet, so the Control Guide pushed on

“Shadborg! I need you to speak out loud the first thought that comes to you

as I randomly read off this list of Keanu Reeves movie!”

The Shadborg agreed, because shit it might be fun. And what else was he supposed to do?

I prefer the comics

I prefer the fat one

The book is way better

Damn right. He’s good in that.

“What the fuck?!” The Control Guide was losing it

“Are you trying to tell me you don’t have one

to you while watching a goddamn Keanu Reeves movie?!”

Just then the atomic buzzer went off signifying

that the time allotted for this morning’s Privacy Breaker

had been reached and it was time to move on

“But I’d like it reflected in the notes that

He will something humiliating while watching a Keanu Reeve’s movie

before our next meeting and verbally share this humiliation with the group.”

The request was duly reflected

and for the rest of the meeting Shadborg nodded his head

along with the others upon those occasions in which head nodding

was publicly acknowledged and thus necessary

and making up a brand new Keanu Reeves movie

that he could explain in ridiculous detail at the next meeting

where he would force share his made up confession

3 and a half hours but I fucking swear to you from start to finish,