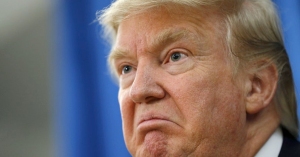 The ‘t’ is silent

In Donald Trump’s version of that tune, which in his new

America tops the charts after being re-titled:

And performed by however many Darryl brothers

From Newhart we’ve got left

The goddamn thing has even inspired a dance craze

856 people have been injured so far for their refusal

To participate, it’s fucking terrible, at some point

The dance involves everyone doing a Human Centipede

Version of The Worm around an organized bonfire

In which they only burn Hillary Clinton bobble-heads

All the goddamn all of it!

I can’t believe people are falling in line

In a warm-Caucasian-scented suite 4 miles outside

The end of the goddamn world

Trump’s standing around with his pants down

Looking like a bloated vulture face-shitting into a mirror

Does my dick look pregnant?!

When I turn it like this, this way here?!

I think it looks pregnant!

With Melania in the background, speaking

Donald, I want a divorce

And Donald hearing it as

Donald I want a horse

Sugar Junk, I bought you

you need 18 so I’ve already bought you 18 horses

I’ve given you so, so much

What more could you want

And Donald smiles and says: You win!

Those tits and that vagina,

You want another horse?

I’ll call my horse guy in the morning

The best horse around……’’