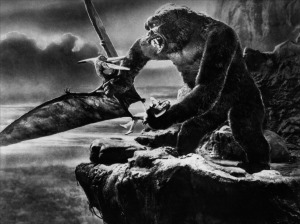 Me Too Night: King Kong

Mr. Speaker, Mr. Vice President Homophobe, members of this library instead of congress, today’s assignment is to converse about a specific work of art, artist, or artistic process that we’ve found specifically inspiring in our lives. That being that, I’ve chosen for the subject of this address a film that I’ve felt deeply connected to for most of my childhood and whatever this thing is that is generally referred to as my adult life, a film that exposed the dangers of mongering fear and a mob mentality, the deadly consequences of unregulated capitalism, and the sad horror of unrequited love. That movie is: King Kong.

King Kong is the story of an introverted gorilla the size of fuzzy ferris wheel who finds himself inevitably captured by a gang of greedy Americans whose goal is to drag him back to their big corporate owned cities so they can chain him to a rat infested stage off Broadway and make a fortune selling tickets to the soulless masses who are always willing to pay for shit like that. Welcome to the modern world. In the midst of all this madness Kong finds himself falling in love with a woman who doesn’t love him back. She’s in love with some cardboard creep who thinks ladies don’t belong on boats and treats her like a continuing annoyance that he occasionally tolerates. This is a story that any every day romantic can relate to. Amazing women are always falling for the wrong dude. At one time or another or in my case always, we all take turns being a Kong.

I’m a clunky human being. I’m inevitably walking into rooms in which I feel like a giant monkey with a broken heart who doesn’t belong there. The behavior of people constantly baffles me. I have no idea how to talk to a woman I’m really attracted to. I’ve been killed before. I’ve been gunned down a few times and more. I’ve had my heart’s grip ripped away from the tip of that big skyscraper that is love. I’ve taken that long plunge towards the cold concrete of cracked sidewalks more times than feels humanly possible. Thus my recent multi-year retreat back inside the illusional safety of my futon shaped jungle. I’m horrible at meeting new people. I see a girl I might be fond of and I immediately start hearing the sound of 1930’s airplanes flipping the safety switches off on their machine guns. I’m dangling naked on top of the Empire State Building all over again. I’m just a big broken gorilla capable of basic gruntings these days when it comes to things like potentially dating. Hey, you appear as if you may be potentially awesome, would you like to go out with me? I’ve never known how to talk to a woman like that. It just seems crazy. Fortunately, I happen to be a poet. A poet who tends to meet women who know how to talk like that to me. This is the only reason I haven’t been alone my entire life like I’m alone right now.

Just like Kong was alone. That’s the real reason they refer to him in the movie as King. He’s a perpetual martyr for loneliness and unrequited affection. Sting may be the king of pain and Adam Duritz may be the king of rain but Kong is the King of love. And love is impossible to control. This world is ruled over by billionaires and politicians who live to control things. In this life everything is dictated by politics. A terrified population is much easier to manipulate then a population that loves. And that’s why the natives on the island in this movie decided to build a wall around Kong and told fake news stories to their children and gullible constituents about the beast on the other side and how its sole purpose is to illegally sneak into their corrupted world view and rape their girlfriends and murder their lawn mowers and steal jobs they have no intention of doing. Which is ridiculous! Kong doesn’t want to rape your girlfriends. It would be physically impossible. His penis would never fit inside something like that. His penis is the size of seven or eight girlfriends tied together. It’s basic science, people. That’s why the current administration hates science. Kong doesn’t want to murder your lawn mowers. He’s from the jungle. He likes his grass long. And he sure as hell doesn’t want your jobs because most of your jobs suck. Kong just wants to be left alone and find a girl who loves him and wants to be left alone too so they can be left alone together. And the corporations that rule things can’t stand that. If everyone gave up on their hate and decided to choose love they’d lose control of everything. So they built a wall around Kong in an attempt to maintain control of things. Without hate and fear they are powerless. So they built a wall around love. In King Kong, that little plan didn’t work out so well. Love breaks out. Yes, after breaking out love is drugged, chained up, finds out that the girl he’s hung up on doesn’t love him, and is eventually gunned down by an armada of tax payer funded war planes. But shit, what else was Kong supposed to do.

At least he tried.

(written for the Me Too reading hosted by Jonny Montgomery, Boulder Public Library, March 5 of the year that is now)