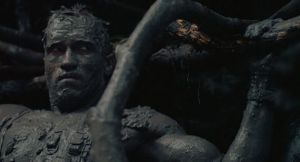 In the new Predator movie

Arnold reprises his role as Dutch

He’s an old man at this point

sitting in the middle of his trailer park living room

(because time has been tough on us all)

to his own penis

A ritual he repeats

and he’s heard gossip that after all these years

the Predators are still after him

and from personal experience he knows

Is the only place

From the goddamn beasts

That insist on stalking us all

So give me some mud, goddamn it!

Because we’re all being stalked by something

Give it all to me, all of it

Give me all the mud

When we last left Dutch,

he was rubbing mud on his dick

because the Predators were coming

Why is he only rubbing mud on his penis?

Why isn’t he rubbing it all over himself

The answer is simple

Because in the first movie, Trump wasn’t president

and at this point in the new movie, Trump’s trade war

has inflated the price of everything

to the point that even mud is really expensive

Dutch can’t afford to hide his entire body in mud

Taking what comfort there is to be taken in such things

That when the Predators come knocking

at least they won’t find his penis

Speaking of not finding his penis

Since the theme of tonight’s Fbomb reading is ‘gossip’

I was hanging out at a museum a few months ago

with a woman. This woman is funny and she’s beautiful

of ending a relationship with this Yeti of a human being

she’ d been dating

so she opened the drawer and inside she found the following items:

A large wad of cash

And a piece of paper that was titled

I’d never heard of this before

What’s a fuck list, I asked, sounding in retrospect

It was a list that he kept, of all the women

he’d ever slept with

My friend said her name was on it, and maybe 4 or 5 others

It seemed bizarre and incalculable

and I immediately became obsessed

with the mere name of it all

Or just self centered Yeti’s

instead of ruler of the goddamn galaxy

as she most certainly deserves to be

I told my friend, and if I did

the only things that would be on it these days

would be sad drawings of cobwebs

and the opening notes to a Beethoven Sonata

or my right hand

and my right hand

and my right hand

And also once you know what it is

it’s almost impossible to stop yourself

and tossing together a mental Fuck List in your head

Back in my younger days, between heartbreaks

what with all the bars I used to hang out in

and living right next to Naropa

Girl who T.A’d for Allen Ginsberg

Girl who may or may not have been Jewel

They just eviscerated the rest of him

And the jackass Yeti